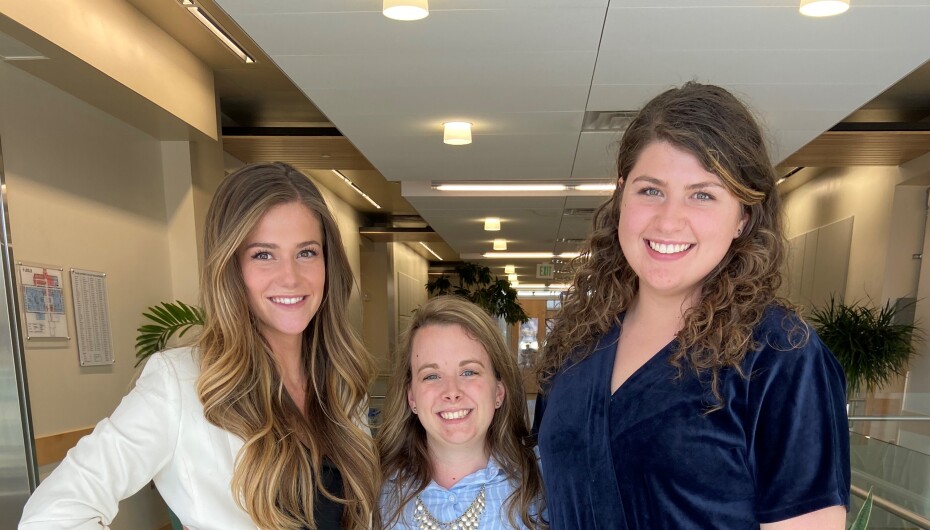 For Emily Spendlove, Kaylie Lake, and Emily Nelson, all health promotion majors, participating in the National Case Study Competition in Health Education in February 2021 was an experience that brought public health to life and showed them how fulfilling a career in public health can be.

Their prompt for the competition was to create an intervention to increase the number of infants in Winn Parish, Louisiana being exclusively breastfed at six months and being breastfed at all at one year, and to present their intervention to the judges in 15 minutes over Zoom.

Spendlove, Lake, and Nelson were given three weeks to prepare. They met three times a week for four hours at a time to research, plan, and practice. In their research, they found that Winn Parish is a very religious and rural area, with 52 churches and 14 thousand people. To understand the needs of mothers in Winn Parish, the students called all 52 churches to ask them about their congregations. To reach younger mothers in their mid 20’s, who were, as a group, declining in church attendance, the students planned to join with local maternity care resources and post signs in grocery stores.

The intervention the students developed targeted an aspect of breastfeeding that other local resources were not focused on. Lake explained, “We found that there were other resources that would help women in the area, so we wanted to focus on the storage of breast milk.” They found that many women in the area needed to return to work early, which made it difficult for them to find time to pump.

Their intervention included a plan to teach mothers about breast milk storage and their resources. They planned to invite the mothers to the local high school for a “so-called ‘baby shower,’’ to show them a video explaining the importance of breastfeeding and how to store and pump breast milk. Many of the mothers in the area aren’t able to travel to Winnfield, where resources like these are generally more available, so bringing the resources to the local high schools would make them much more accessible. The students would also give the mothers breast milk storage bags and invite the mothers to come to classes they offered and to create a plan with their employers about returning to work. They would also encourage local businesses to provide private areas where mothers could breastfeed during their break times at work. Lake explained that this approach “would really help mothers to focus on the importance of storing breast milk while still helping them go to work and provide for their families.”

When the time came to present the intervention to the judges, the students were well-prepared, and their presentation was a success. Beth Liechty, a public health academic advisor, said, “They put in so much time and effort working and practicing and they did a really, really superior job.”

For Lake, the experience gave her confidence and excitement for her future in public health. She said, “It helped me visualize how everything I had been taught fit into real-world situations. Everything just kind of clicked. It was a really rewarding experience that confirmed to me that I am capable.”

The most meaningful part of the experience for Spendlove was her interactions with the community in Winn Parish. She said, “Reaching out to the communities, going out of our comfort zones to call these people and ask them questions truly made me care about the community.” She also learned about the value of learning from communities. She said, “Having a public health degree doesn’t mean that I’m an expert, it just means that I have the tools to help facilitate something wonderful within people. Having a more practical feel for that got me really excited.”

Another part of the experience that was meaningful for the students was the opportunity to reflect on how their professors have made a difference in their lives throughout their time in the program. Spendlove said, “I felt this keen sense of gratitude and true admiration for these incredible people who have helped foster in me not only the ability to help people but also a passion for it.”

Liechty encouraged other public health students to participate in the future. She said, “To be able to be given a specific problem within a community and then to come out on the other side with a legitimate public health initiative or program is a huge skill and a valuable exercise in what the real public health world is like.”

With the skills Spendlove, Lake, and Nelson have developed in the public health program and with the added skills they have gained through experiences like the National Case Study Competition, they will be prepared to serve throughout their lives.